I’m slightly delirious so you’ll have to excuse this update as I have the Jackson Five song on repeat in my head.  I think this part of the trial is not so much a test for reactions to Venetoclax, as a test of human endurance/water/sleep deprivation torture – I have now not had more than 45 minutes sleep for 48 hours and I’m really feeling it.   My trial nurse Sam worked a 16 hour shift yesterday so I can’t complain as I know he’ll be feeling it today too.   I’m so lucky to have him, he’s so calm and, most importantly brilliant with needles, we’ll be into the 100’s of “just a wee scratch” by the time we’re through. This one on one care could become a bit addictive too.   All these vials needed to be filled within 24 hours of taking the drug (needles are not so addictive).

I took 2 x 10mg tablets of ABT-199/Venetoclax at 2pm yesterday after overnight hydration in Barts – had a lovely room to myself on the stem cell ward so they could keep an eye on me….and boy have they kept an eye on me.  Hourly observations, blood tests every 2hrs for 12hrs to 2am then another at 6am plus I had about 7 litres of fluids over the course of yesterday and overnight so I’m very pleased I have an ensuite.   My poor arms are very sore – it’s a lot of needles and that PICC line would be a good idea for those who follow me.
Here is a photo of me taking the first drugs – I was a little bit nervous but also very excited. 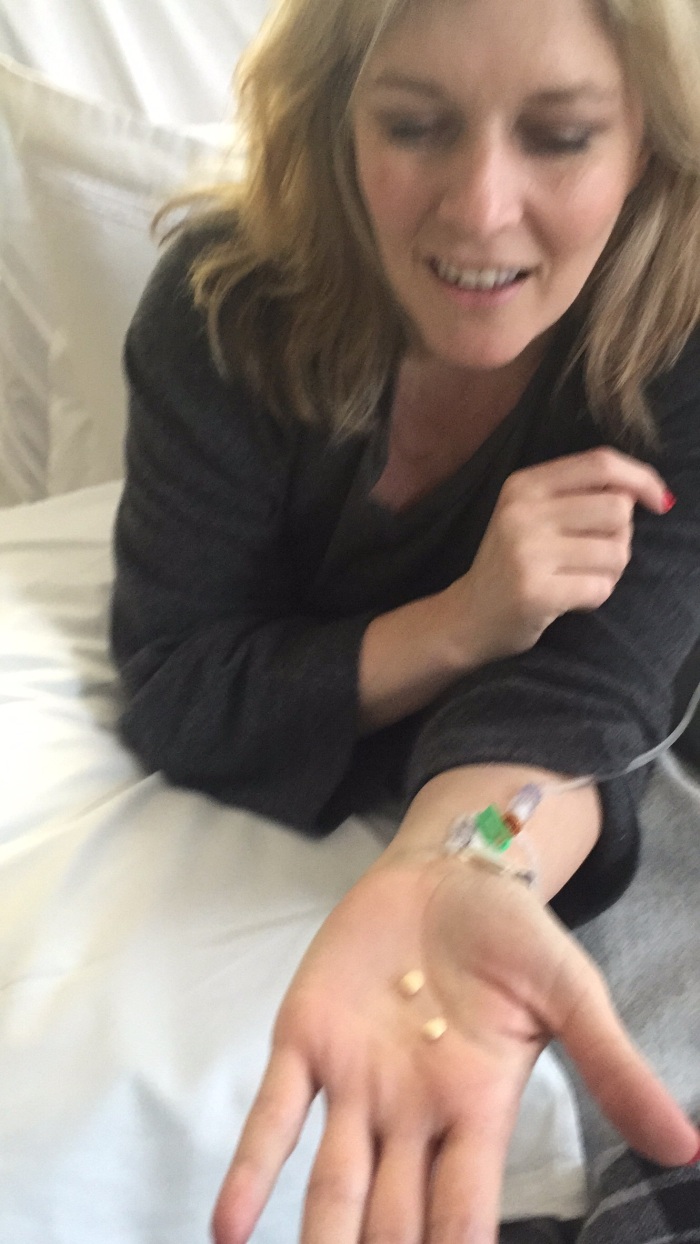 All my bloods have come back in the normal ranges.  There was a slight biochemical reaction as my liver processed the drug but the peak time for Tumour Lysis was 6 hours after taking it and that passed without incident.   Professor Gribben came to see me in the morning before I took the tablets (along with a camera crew) and he really reassured me that I was low risk for TLS but that everything was in hand here at Barts if I was showing any signs whatsoever.   He told me they were following advice from the Peter Macallum Cancer Centre in Melbourne (ironically my local hospital) who have treated more patients with ABT-199 than anywhere else in the world.   I will post his interview on the blog as soon as I get the ok from the hospital’s communications team.   A  film is being made about my journey by the patients advocacy website Patient Power – it was really great to have a record of yesterday and a privilege to hear one of the world’s leading CLL experts talking about my case, and the possibilities for patients like me.  I think it will be a good resource for other patients, and from a personal point of view, I’m pleased my children will be able to watch it when they’re older to understand why I had to leave them for so long – Professor Gribben does outline just how poor my prognosis is without this treatment which is very sobering.
As for the tablets themselves it was all thankfully anticlimactic.    No drama from me last night and today I’ve just been given my 6 day supply of venetoclax (ABT-199/GDC-0199).  I’m about to take my next 20mgs.
I have a 2pm blood test and then if that’s ok I’m outta here. 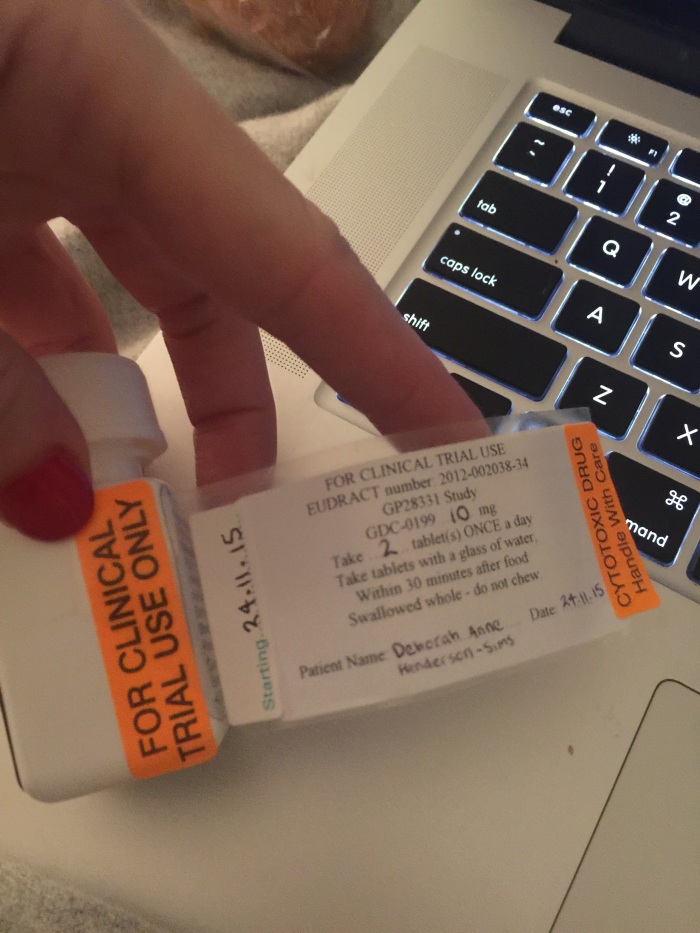 Not back until Monday for a repeat of the hydration and then Tuesday’s 50mg dose ramp up plus the second cycle infusion of obinutuzimab.  There is a risk of TLS with every dose escalation but if I don’t have it again next week then I should be able to have the rest of them just as a day patient.    One funny thing was all for my reading and knowledge I didn’t realise I hadn’t actually been doing my basic job of taking the correct number of pills of acyclivor (my anti-viral to prevent shingles) over the past 3 weeks.  I’d only been taking one 400mg dose a day but it was supposed to be two a day – oops – for the record Sam had given me the correct information and it was on the box, I just stuffed up.   Didn’t get sick so no damage done.  I’m also on 300mgs of allopurinol a day to protect my kidneys. 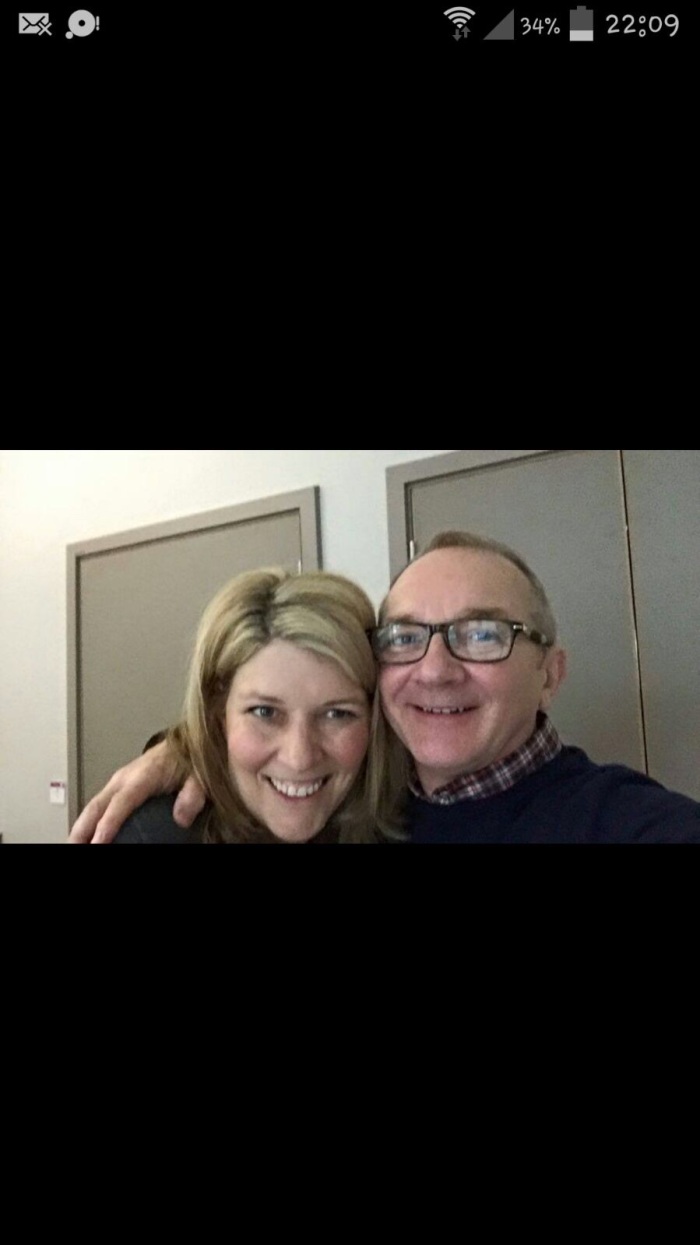 My friend Eddie, who funnily enough was at medical school in Glasgow with John Gribben, has spent a lot of time in hospital with me these past few weeks – he was a consultant at the Royal London Hospital so understands everything much better than me so I’m very lucky.
I facetimed the kids this morning – Natasha told me that when she wakes up tomorrow it’s only one more sleep until they are coming to London – I cannot describe how excited I am.
The camera crew will be with me so you can all share the moment.   The interviewer asked me what kind of activities I was looking forward to doing with them when they arrive – I wish I’d had a camera on Professor Gribben’s face when I said I was hoping to take them skiing in January!   I’m sure I’ll win him over.
Final random thought for all those spending a fortune on expensive face creams – it’s amazing how much 7 litres of water makes your skin glow, despite making your cheek bones disappear…see there are benefits to everything.  ABT hydration, the new Creme de la Mer.