Couldn’t resist blogging from the front of my Emirates plane tonight.   Wifi mid air, how inspired.   I’m in the final 2 hours of my 26 hour journey home and, even in the most amazing first class in the sky, it’s still hard going.  I’ve also realised tonight, with horror, that this is not a monthly trip for me – I will have to be back on the plane to the UK, in order to make my first monthly follow up appointment in 3 weeks and 2 days.  That’s flying every 3 weeks for the next 7 months in order to stay on the trial.   I know I campaigned to get onto a trial on the other side of the world but the implication of this ongoing commute for my family, bank balance and my sanity is only just beginning to dawn on me.  But enough of being a whingeing pomme, as fellow Aussies would say.  Let me give you a glimpse into my journey.

I was collected from my friend’s house by Qantas in a bullet proof BMW M7 sport and, whisked to Heathrow, well whisked is not exactly the right phrase given we were stuck in Easter weekend traffic for 3 hours, but at least I was stuck in style.  My driver told me how he takes the likes of Angelina Jolie and Brad Pitt and they have a fleet of bullet proof cars for transferring high security clients – not sure how I got one but was nice to feel well taken care of especially as  I was feeling pretty rough.

Cycle 6 had not gone well the day before.  I had another allergic reaction to the obinutuzimab and, no matter how hard we tried using steroids and anti-histimenes we could’t get more than 6mls an hour into me without me getting the itching sensation.  More worryingly when the rate was increased to 25mls an hour my reaction was becoming anaphylactic so we had to stop. It meant I only got 25mls of the 1,000mls of cycle 6 into me.  Was disappointing but it was the right call to stop and as you can see in this picture with my friend Camilla I look tired but pretty relieved that it was all over. 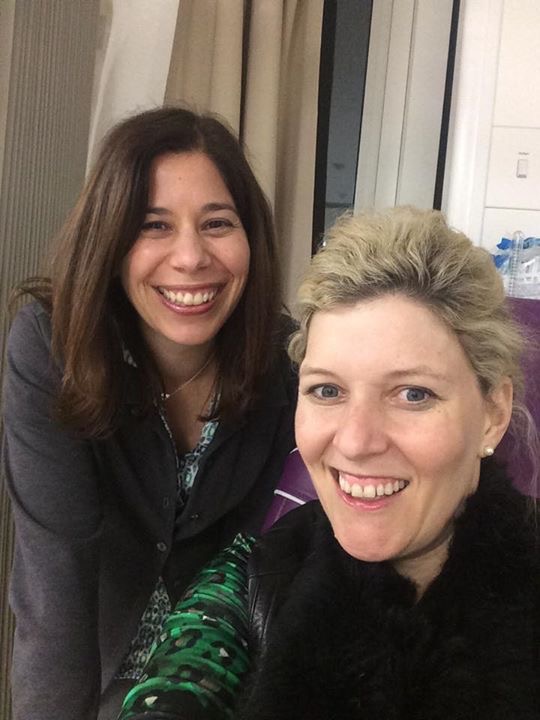 After 6 months of combination therapy this was my final day in hospital.   Now I just take my 4 venetoclax daily and hope to get into complete remission and to a level of no detectable disease.  It was such a relief for it all to be over and I book ended it with a photo of myself with my new trials nurse Berta, matched with one with Sam taken on the first day of treatment – what special people in my life. 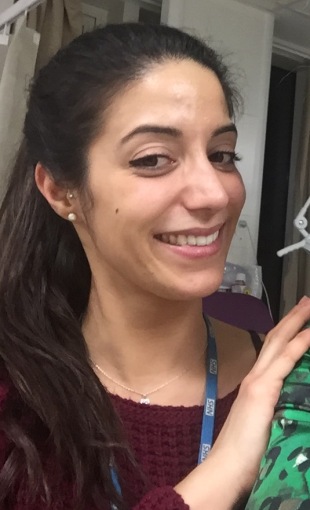 I woke up the next morning at 6, my throat and chest still sore from the obinutuzimab reaction. I’m amazed I got any sleep at all given I’d had 80mgs of Dex you can see how wide eyed and scary I look in the photo above.  I was quite groggy and made myself breakfast and put my box of venetoclax on the table ready to take after it (I forgot my trusty pill boxes this trip).  Somehow I managed to get distracted (could blame anything from copious amounts of drugs to jet lag) but I ended up taking my dose twice.  At first I couldn’t work out if I had but when I looked in the container I could see there weren’t enough tablets so panicking I quickly rang Barts as 800mgs of venetoclax is quite a jump from my usual 400.  I was told to drink lots of water, take a piriton and come in if I started getting any major symptoms.   This was all around 8am.  By 2pm I was bright red.  Kept in touch with the hospital and the advise remained the same.  Of all the days to do this it had to be when I was desperate to be on that flight to get home for Easter.

The venetoclax would have had its peak effect around the time I first started becoming flushed so I was given permission to board the flight but had to alert the Qantas staff to keep an eye on me.  I kept drinking water and taking piriton and paracetamol and had to forsake the champagne.  Barts told me to skip the next day’s dose which meant I wouldn’t be taking anything while I was flying.   There are clinical trials for Lymphoma patients on 800mgs so I wasn’t too concerned, particularly given I have very little detectable cancer left so TLS is no longer an issue, it just wasn’t the time to have this additional worry.

The difference in the ticket price was definitely warranted on this journey particularly given it’s Easter school holidays and even business class is packed with beautiful snotty nosed faces.  I cannot afford to pick up bugs on this journey as that Spanish flu virus showed my immune system is not strong enough to shake them off and I don’t want to be permanently sick.

A friend of mine said I’ve just got to consider this period in my life my job – it’s my job to get well, to be there to be a mother to my children and, if my job means a massive ongoing commute to the other side of the world, then I just have to join the ranks of the Deutsche bank executive in the seat behind me.

So here I am a couple of hours out from home, tired but pleased this week is over.  I’ve just had my on board shower – check out the bathroom – it even has underfloor heating!  How am I ever going to turn right on a plane again? 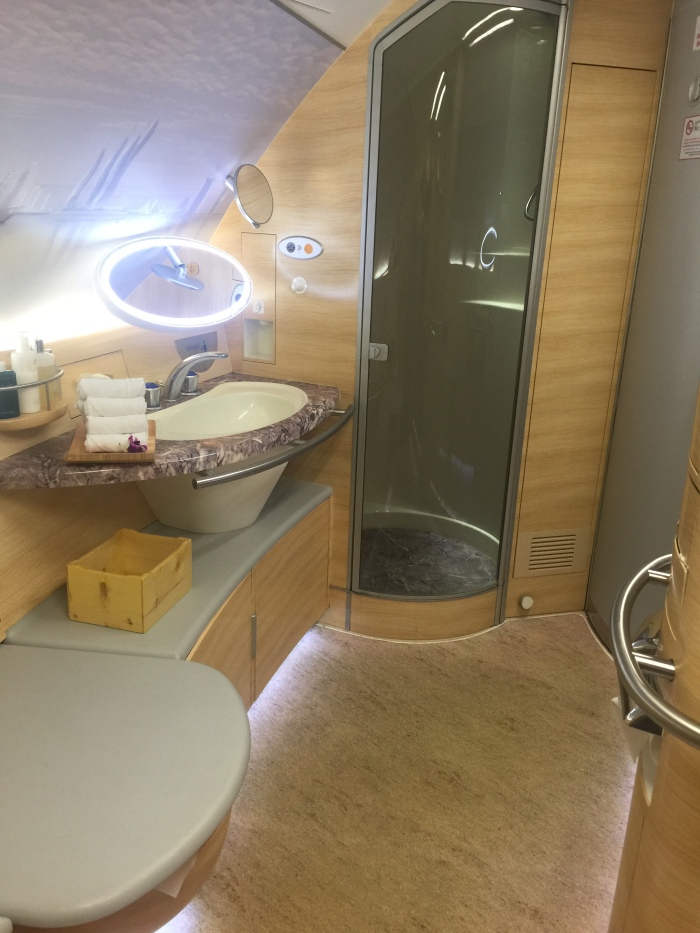 And for the makers of venetoclax, Abbvie, here’s a little picture of their life saving drugs travelling in style with my apologies to the trial sponsors Genentech for the overdose and my body deciding it had had quite enough of cycle 6.  Landing in Melbourne now and I’ll get home in time to get on with my other job of making my children pancakes for their breakfast.  Happy Easter everyone. 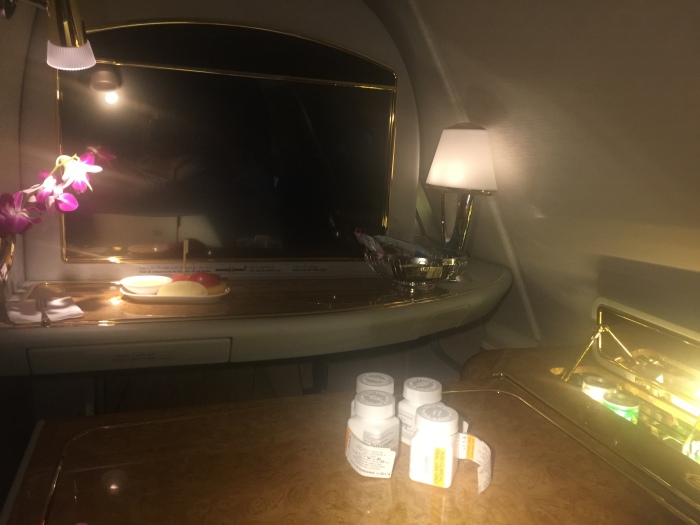