How I met the Professor

I’ve had a few emails asking me how I have ended up in the UK from Australia (and thank you for the lovely feedback) so now is probably as good a time as ever to share the story of how I met Professor Gribben from Barts.

I have two wonderful specialists in Australia, my original haematologist Dr Melita Kenealy from Cabrini Hospital, who diagnosed me in December 2011, and my prospective transplanter Professor David Ritchie from the Royal Melbourne, who was the first doctor to use the words potential cure around 4 months later.  I trust both of them with my life and, despite my type A control freak personality, would go along with their treatment decisions in a heartbeat.   The fact is I delayed having chemo beyond the point I should have and when I finally did have FCR wished I’d listened to them and had it a couple of months earlier such was the improvement in my quality of life (they were good enough not to say we told you so!).   When my disease relapsed this year to the point that I required further treatment I was inspired by one of Australia’s most successful businessmen Ron Walker, who had travelled to the US to enter a clinical trial for aggressive melanoma.   You may want to read the article which triggered my pilgrimage –

My feeling was that, I may not be rich, but if there was a better treatment option open to me overseas that wasn’t available in Australia then I would move heaven and earth to access it.   So with my doctors permission I travelled to the US in April to get an opinion from Professor Thomas Kipps at the University of California San Diego.  Professor Kipps is one of the world’s foremost CLL experts and my visit coincided with a patient conference organised by the CLL Society and the CLL Research Consortium to give patients the latest news on clinical trials.  It was perfect timing for me and I appreciated my Australian doctors humouring me by agreeing to let me explore other treatments before we proceeded to transplant (this is still the only known potential cure for CLL).

Professor Kipps’ opinion was that I shouldn’t yet have a transplant and that I should have some novel therapy to buy me some time before a good clinical trial opened up in Australia – indeed Professor Ritchie had been exploring what was available for me to use as a bridge to transplant before I left Australia.   Professor Kipps also urged me not to consider a clinical trial in the US for if anything were to go wrong, being uninsured, I could end up with medical bills running into the millions.

The next day I went to the conference.  Jetlagged and totally exhausted I crept into the back of the theatre just as a Scottish doctor was giving his presentation.  Funnily enough I took a photo.

I asked the patient next to me who was speaking and she said it was Professor John Gribben from St Barts Hospital in London.   After he finished the Professor walked up to an empty chair beside me in the back row and sat down – you can see from the picture how many people were in the room!   I was wearing a toy koala on my jacket as there were people trying to meet up with me and he asked if I’d travelled from Australia for the conference and if I was a carer.  I said no I was a patient and he said if I didn’t mind could I tell him how old I was when I was diagnosed – I said I was 38 and he asked if I’d had treatment.  I told him I’d relapsed early from FCR and he said so you’re here looking for a clinical trial.  I said I was and he said but you’re British – I have a great trial for you if you can make it back to London.  That is how a chance meeting led me back to Blighty. We spoke after the conference and the Professor said he hoped that there would be a better option in Australia which wouldn’t mean so much upheaval for me and my family but added that he would get his trials nurse to forward all the details to show to my doctors.    That night I flew to another patient conference in Niagara Falls organised by the Canadian CLL patients group where I met Professor Michael Keating and we talked footy (another of the world’s leading CLL experts based at MD Anderson and an Aussie to boot).

Everything moved so quickly after that.  The first person I caught up with was Dr Constantine Tam, one of our leading CLL experts who is also responsible for bringing a lot of the international clinical trials to Australia.  He said that, despite Australia having more experience with ABT-199 than anywhere else in the world, the trial in which I was most interested would not be opening there.  The only way I could access the drug would be to enter a phase 3 study where it would be randomised against more chemotherapy – had I not already failed chemo I would have jumped at this opportunity – it’s called the MURANO trial for the Aussies reading this.   After going through all my options with me he reluctantly agreed that the best potential treatment for me (and please note this won’t be the same for everyone else given how heterogenous this disease is) was the London trial.  He added that there was no rush as my disease was fairly stable and I would actually need to have more progression in order to qualify for the trial.  I then saw Professor Ritchie and I was convinced he would try to talk me out of it, but he actually agreed with Dr Tam, adding that he thought ABT-199 was a great option for me and that this potential new therapy combining it with Obinutuzimab could be the only alternative to transplant for me.  If it didn’t work as well as he expected then at least he knew I’d be happier to proceed to transplant knowing that I’d thrown the kitchen sink at this disease (my words not his!).  If I didn’t make it onto the trial plan B had to be boarding a flight back to Australia and letting him get rid of my dodgy immune system and replace it with one that actually recognised the leukaemia and would start attacking it.

So here I find myself.  The hardest thing is being separated from my children but their father and I agreed that it was best for them to stay at school in their routine, particularly as I would be spending so much time in hospital.  They all came over a few weeks after I arrived for their spring school holidays and will return in 3 weeks time for their long summer break and first wintry Christmas.

It was my daughter Natasha’s 6th birthday today and it’s the first time I’ve ever been away from any of them on their birthdays.  Thank goodness for technology – it was a delight to watch her opening her presents via FaceTime and I wasn’t too down knowing that I’m here to make sure I’m around to see her open them for many more years to come and will spoil her rotten with a Mummy and me day when she gets to London. 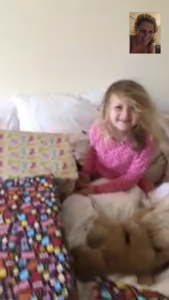