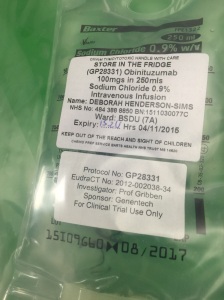 Today has been a very long day in the infusion chair with Mum at my side, you’re never too old to need your Mum.   The first of my two drugs, the monoclonal antibody -Obinutuzimab (previously known as Gazyva),  only started being infused at 4.22pm at a rate of 100mgms over 4 hours after lots of hydration, Premeds including steroids, an antihistamine and that wonder drug paracetamol.

I had been warned to expect a reaction and was suddenly flushed with a warm fuzzy feeling, followed a few minutes later by a scratchiness in my throat then breathlessness and a constriction in my chest and a overwhelming sense of needing to throw up…had my friends Eddie and Mike with me at the time so managed to stop myself and they got my trials nurse Sam who stopped the infusion, put another Canula in my other hand for some anti-emetics (I had a bit of drama yesterday with the PICC line which I won’t go into suffice to say I left the theatre in tears and refused to let them have a second go at putting one in me).  I was a bit cheerier when I arrived back here this morning… 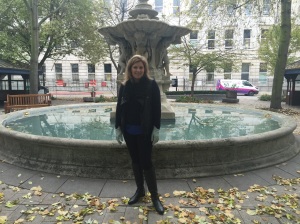 This is a very powerful drug and I have never had a reaction to anything like it.  I tell my friends that this is the drug that puts a tail on the Cancer cell and then stimulates my dodgy asleep on the job immune system to kill it so I think it was getting to work straight away.  20 minutes later, when I had had a break and was feeling better, the infusion was restarted at a rate of 100mgms per 6 hours and my nurse stayed with me to check I was ok before putting me up to the higher rate. I’ve now been back on it for 20 mins and, touch wood, I feel fine so hopefully that’s the allergic reaction done with.  The day ward closes at 8 and I’ll need to be infused until 9 then have to have bloods 2 hours later so I now have a bed for the night here as my day starts at 8 tomorrow.   Almost like doing shifts at work!    This will be the first time in the almost 4 years since diagnosis that I’ve had to spend a night in hospital.    Still excited but tinged with a note of now appreciating my new reality – my nurse reminded me that nausea can do that to you (and I hadn’t even had the benefit of a big night out).  And how’s this for my view today?! 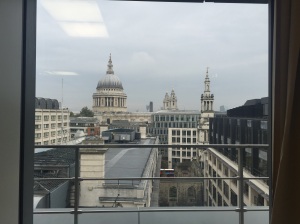 Quick update – the infusion was restarted and I had no further reaction for the rest of the time.  It finished at 11pm – just waiting to do a blood test for the trial in around 40 mins and then will be heading home (no hospital stay tonight – yipee!)